Nella the Princess Knight Wiki
Register
Don't have an account?
Sign In
Advertisement
in: Characters, Females, Creatures,
and 6 more

She first appeared in the episode The Tooth Fairy Tale, in Pearl's mouth.

As the Tooth Fairy, it is her job to leave gifts for children in exchange for their baby teeth.

She has a sweet friendly disposition.

Appearance wise, Talia is rather small and cute, has dark skin, and black hair, blue eyes, and blue wings. She also has pointy ears, and wears a blue puffy long sleeved dress, blue shoes, blue glasses, and a blue tiara with a blue tooth in the middle. 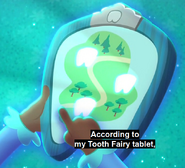 She is shown to be best friends with Pearl the dragon

Community content is available under CC-BY-SA unless otherwise noted.
Advertisement