Nella the Princess Knight Wiki
Register
Don't have an account?
Sign In
Advertisement
in: Characters, Females, Dragons,
and 4 more

She seems to be very clingy, which is the reason she wanted Talia to stay with her.

Being a dragon, she probably has some kind of special breath, since dragons are known for fire-breathing.

She is large, purple, has two horns, and wings, sharp teeth and a long neck. 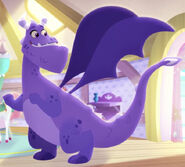 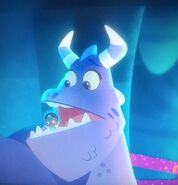 She loves her friend Talia dearly, almost like a sister. She does also become friends with Nella, Trinket, Garrett, and Clod at the end of the episode.

Community content is available under CC-BY-SA unless otherwise noted.
Advertisement