A Tricksy Wedding is

while Nella and the gang prepare for Garrett's dad's wedding, Tricksy swaps the ring for something silly. 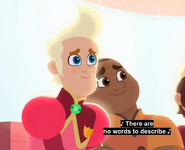 Add a photo to this gallery

Coach: "Gregor and Gloria, I now pronounce you wife and husband."

Retrieved from "https://nella.fandom.com/wiki/A_Tricksy_Wedding?oldid=4799"
Community content is available under CC-BY-SA unless otherwise noted.